Cosmo is a useful tool to support both your child’s and your family’s daily life through enabling ways to communicate easier and more effectively. Cosmo aids inclusive play with siblings allows quality family time and supports family interaction through a variety of activities available in the Cosmo Training app. 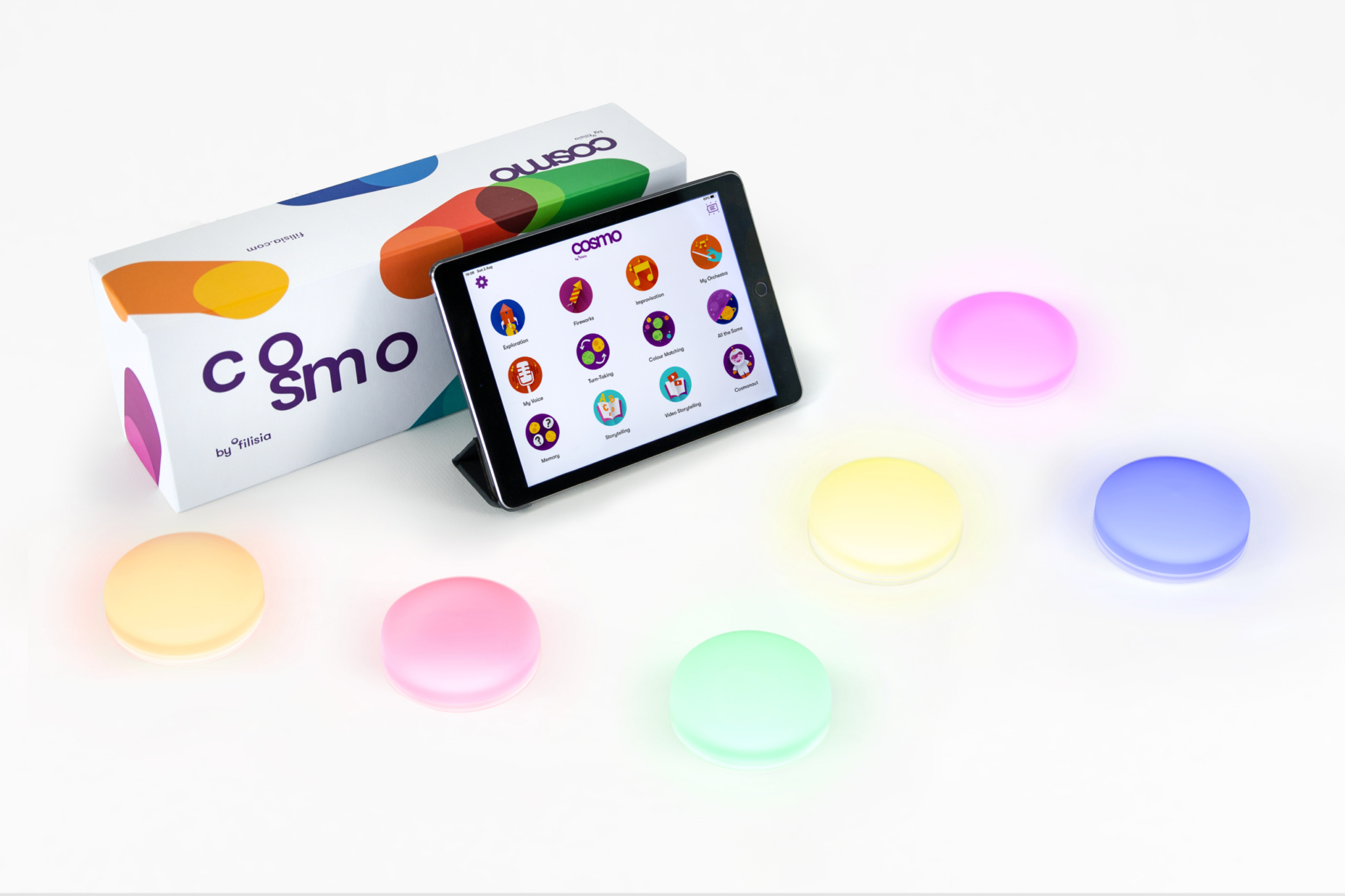 How to play with Cosmo

Let’s have fun together

Cosmo can facilitate quality family time and inclusive play with siblings and peers. With the activities available in the app, you can foster collaboration, communication and team problem-solving with the members of your family.

Use Colour-Matching activity to help children develop shared attention, communication and collaboration skills, supporting following instructions and joint attention along the way. The aim is to find the Cosmoids that light up with the same colour as your partner’s and then press them simultaneously to make a match.

TIP: For these two activities, choose whether to place Cosmoids on the floor or attach them to the wall using magnets. Use hands or balls to hit the Cosmoids.

Use All the Same to practice problem-solving together with the rest of your family. Each time you press a Cosmoid, it changes colour, and you have to work together to make all of the Cosmoids the same colour. Roll the dice to choose which colour is next or choose an object in the house and match the colour of the Cosmoids.

All Different is a similar activity to All the Same, except that now your task is to make sure no Cosmoids are of the same colour.

Use Cosmo to complement sensory circuits across alerting, organising and calming stations.

Alerting station provides vestibular and proprioceptive stimulation within a controlled environment. At this station, use Cosmo to complement some physical activities or singing action rhymes.

Calming station utilises proprioceptive or deep pressure activities to help children complete the circuit feeling calm and relaxed. At this station, we invite you to experiment with the responsiveness of Cosmoids. Encourage your children to do activities using more force.

Cosmo can support an active lifestyle through a variety of movement activities that will motivate the whole family to get involved.

Exercise is a fast-paced activity involving attention, coordination and spatial awareness. Place the Cosmoids around in the room, then race to hit them and collect points before time runs out!

Showdown is our favourite activity which we often play in break time in our office. It is a fast-paced game for 2-6 players. Select the colour for each team and chase Cosmoids that light up with your team’s colour. Who can press the most Cosmoids before the time runs out?

TIP: For these two activities, you can use hands or soft, squishy balls to press Cosmoids. You can also experiment with attaching Cosmoids to the wall and see how high you can reach with your hands

We are going to bed

Use Storytelling to engage your child in sensory stories by navigating through a story using Cosmoids. As you’re reading the story aloud, press the Cosmoid that lights up to hear the matching sound. You can use a board and velcro tape to stick the Cosmoids to the board. TIP: Try using a board that is black to contrast them with the colours of the Cosmoids.

Supporting communication is at the centre of every Cosmo activity. Intentional communication, problem-solving, expressing preferences, vocalisation are the pillars of many activities available in the Cosmo Training app. They encourage children to express themselves with words or stimulate alternative ways of communication.

Toggle allows you to control the playback of music with Cosmoids. Simply press the Cosmoid to change the light and play or pause the track. This activity allows the child to practise intentional communication and supports independence.

Fireworks is a fun and interactive activity that uses one Cosmoid. When a child presses the Cosmoid, they are rewarded with exciting fireworks on the screen. It’s a great activity to practise intentional communication skills.

My Voice is a fun-filled activity that aims to strengthen speaking skills. Encourage your child to record their voice, then touch the Cosmoid to hear the recording using different sound effects.

Video materials and pics from the Pilot programme
Lesson plans