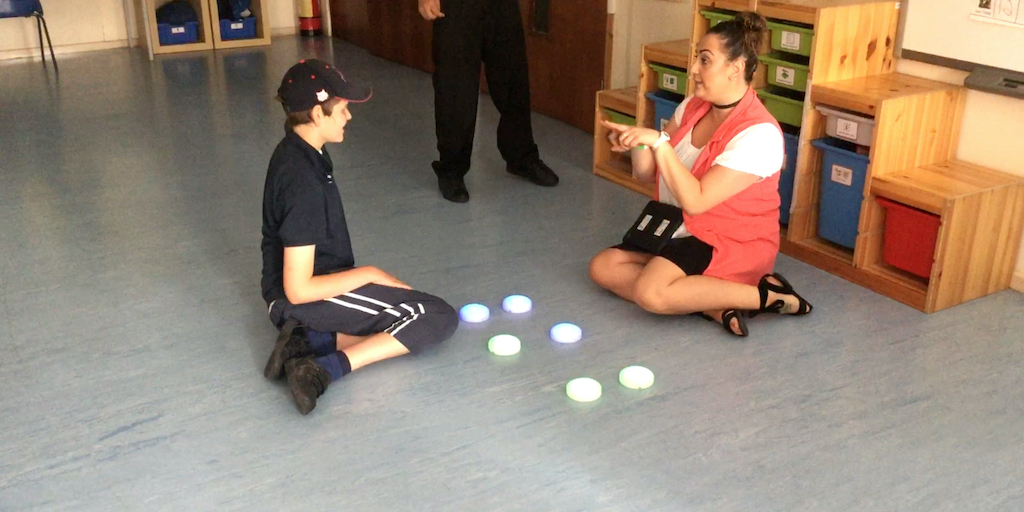 Cricket Green is a forward-thinking SEN school in South London that has been using Cosmo to focus on the individualised learning experiences of many of its students.

Meighan used Cosmo to facilitate a long-term movement and teamwork activity with her class, all of whom are on the Autistic Spectrum. Meighan collected students’ scores from Cosmo activities over a whole term, displaying them on a scoreboard and adding a fun, competitive aspect to the weekly sessions.

How was Cosmo used?

Meighan wanted to introduce a whole-class activity that would increase her learners’ movement, spatial awareness, and scanning skills and nurture skills such as joint attention and collaboration.

She used two Cosmo activities (Exercise & Showdown) during regular 40-minute lessons over a whole term. The Cosmoids were spread around the class, and students had to find and press as many as they could in a given time. Students then wrote their scores on a large scoreboard that the class had created together. Students also split into teams and played Showdown together which involved each team being allocated a colour and then finding as many of their coloured Cosmoids as possible, in a given time.

“Cosmo is fantastic, and I can’t say enough positive things about it. It’s really helping the students to develop their turn taking skills, to work together, and to have the opportunity to give directions to the rest of the class.”
Meighan Curren

How did pupils respond?

The students picked up the concept of each activity surprisingly quickly and were really motivated by the exciting colours and sounds that the Cosmoids made. Meighan mentioned that some students moved far more than usual and stayed engaged in the activity for an impressive length of time.

Having the Cosmo Teacher’s Guide was really handy as there are many tips on how to incorporate Cosmo into daily school activities. We started with the Cosmoids close to the students and then gradually moved them further away, encouraging more movement and scanning. It made the activity more challenging but in a fun way.

Showdown also worked really well for encouraging teamwork between the students. We could split them into an Orange team and a Green team and get them to work together, and also competitively.

Initially, the biggest challenge was getting each student to wait for their turn to play. Introducing the team element meant that students didn’t have to wait as long, and it’s great that you can change the length of the activity in case you feel it’s too short or too long for the students your working with.